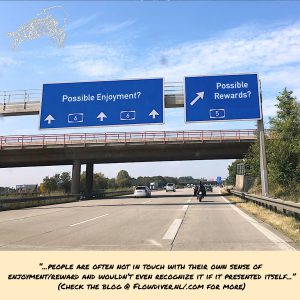 After not posting a blog last week due to external factors, this week’s Flowdiver blog comes out on the Thursday. Why is this not coming out on Friday I hear you ask? Well, that is because from Thursday afternoon untill Monday morning I will be attending one of the most beautiful music festivals in the world. And after a summer of working very hard, I am looking forward to that enormously! Of course this has nothing to do with this blog, but then those of you that like structure know what it going on.

But let’s get down to business. In this blog we will be looking at the final element of the six basic elements of a working product. This element could be placed both at the beginning or the end of a creative process. Enjoyment is something you can already experience in advance before starting a project, while the project is taking place or after finishing the project. The same goes for the reward. A creative proces in itself with all the experiences that form it, can be a reward in itself. But also the ending product that stems from a creative process can feel like a reward in itself for all the hard work that you have put in.

Enjoyment is a rather broad term that can be applied in multiple ways. Enjoyment is a universal concept and feeling that can be described as ‘I am doing well and I am feeling well’! Both people and animals know this feeling and it can be stated that every conscious organism tries to achieve a certain state of enjoyment. Enjoyment is therefore a good motivator to start doing things and take steps in a creative process. A lot of people start a creative process because they want to experience the enjoyment of working in this process or because they want to enjoy making the ending product they are envisioning. And this also ties in with the concept of rewards. The enjoyment that can be experienced during a creative process can be seen as a reward, but also finishing a product and receiving the reward at the end can be very enjoyable!

This all sounds like simple concepts and open doors, but people are often not in touch with their own sense of enjoyment or reward and would not even recognize those moments if they presented themselves. A sizeable chunk of people feels that the creative process is a chore and therefore mostly a negative experience which has little to no room for enjoyments or rewards. This is something that often happens when perfectionism takes hold combined with the modern day way of thinking that we all have to be instantly succesful. It is therefore important to remember two core values, being:

1: A person must make as many things possible to become good at something. A good working product will not (just) happen without proper preparation.

2: The value that someone else gives to the work you made, doesn’t have to say anything about the value that your work has to you.

These may seem like two independent sentences, but they are both very much linked to enjoyment and reward.The first quote is important to remember when you are working in your creative process. Of course you should do your best and must try to deliver the highest quality you can. You do want to make something that is good and that can measure up to today’s quality standards.

But it is also good to sometimes step back, take a look at the process and realize that the process by itself can also be very enjoyable. And yes, that also applies if the thing you are making is not the most revolutionary, perfect, groundbreaking product mankind has ever seen. There is nothing wrong with aiming high. But don’t let the danger of extreme perfectionism diminish the enjoyment or rewards that a process could contain.

The second core value stated above ties in with perfectionism and the expectations that are projected in this current day and age. We live in a time in which the amount of likes, shares, loves etc seem to be the norm. Because, what if nobody likes what you have made… Is it still succesful then? Is there a reward then? Did the creative process have any use?

Of course it is very nice to see that people notice your work and appreciate i tand that can be very flattering. But the experience tells us time and time again, that a good creative process (And thus a good product) cannot come into existence because the audience wants it, but because the creator wants it. The motivation, the enjoyment and the reward in this process have to be intrinsically present somewhere.

The main drive to make something should be coming from the inside and because you want to make something pretty/cool/strong/awesome/whatever that you want to make. So if you can look at your product and say that it adheres to the standards you have set for yourself, the product will then also be your reward. And of course you might get criticism on that and there probably are things that can be improved upon (As stated in core value 1, nothing ever is perfect on the first try) but the core feeling of satisfaction and enjoyment that you feel when something is done, is the reward you worked hard for. Then it is important to take the feedback and criticism you get and take it to the next project, but not to let that ruin your current rewards and sense of enjoyment.

Of course it is also good to understand that enjoyment is not always the only state of being. Life is not a continuous positive experience and that would also be an unrealistic expectation. There will always be moments in a creative process that are far less enjoyable. Some things are just not exciting and tedious as well. Yet, it is a good thing to then realize that you started doing this with a reason and that the ending product will then be your reward that WILL bring you enjoyment. Also, you could try to turn it around: If you do the things you don’t feel like right now anyway, you can still get enjoyment and/or a reward out of it, because you got it done!

So in conclusion, I can say that it is important to look at the creative process and understand what we do and which goals we aim for to achieve a sense of enjoyment and/or the rewards it can hold. Sometimes that reward can be in a place you did not expect or the enjoymentt can be found in different spots than anticipated. Just remember that both the enjoyment of the creative process and/or the rewards that can be reaped, can be achieved in many different ways.

If you are able to find the enjoyment and the rewards that come along with that, you basically achieved the highest reachable sense of happiness a creative person can achieve. And I sincerely hope that you will all experience that as much as possible!

See you next week!
Tom